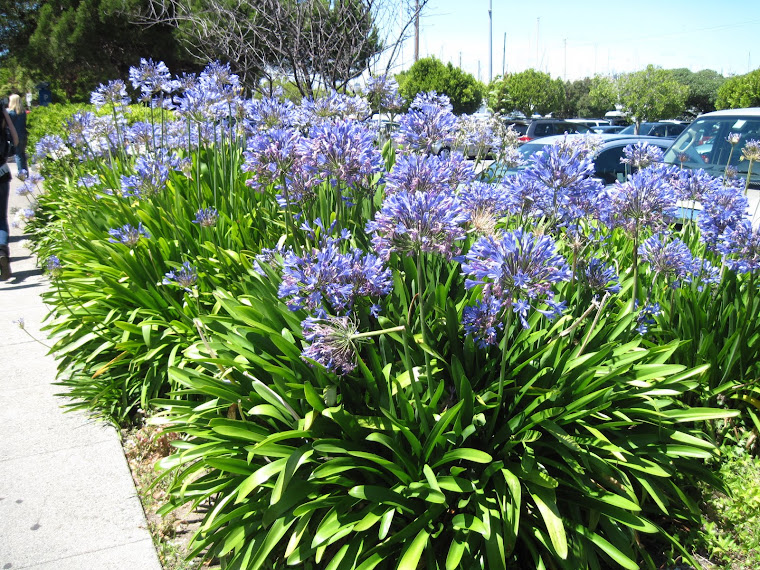 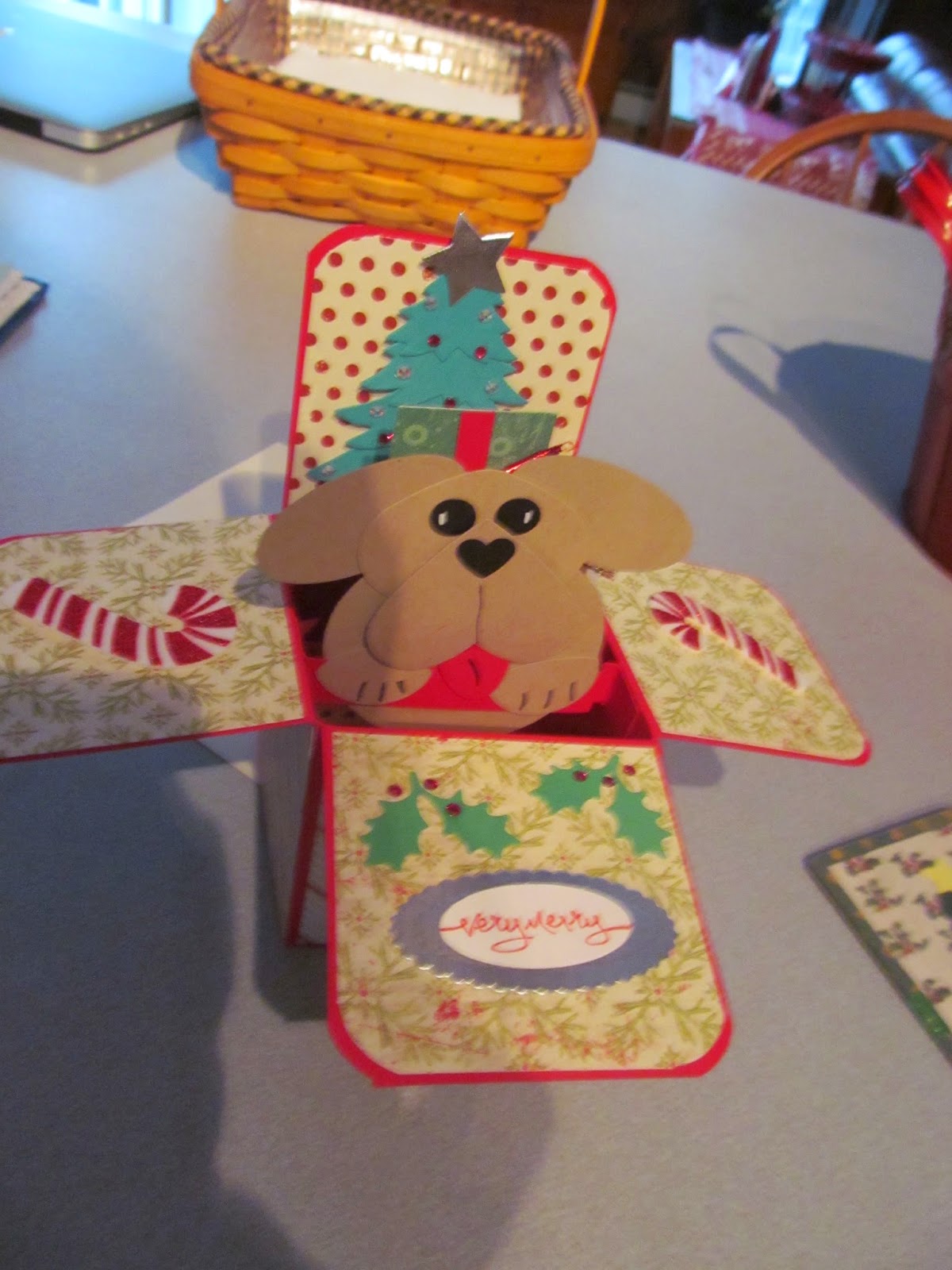 Another card in the box for a Christmas/thankyou card!  Our neighbors have been so good about caring for our dog, Gretel and wanted to make them a special card!  Christmas tree for the background with presents behind the punch art big dog!!  The punch art dog was a combination of punch art dogs I saw on pinterest.  I used the heart punch for the snout, oval punch for the tongue, paws and ears. The head is the ornament punch and of course, small heart punch for the nose.  It is a simple little dog but so very cute!

This is a better picture to show the presents under the tree but behind the pup!  The paper I used was from Authenique and, I think, Bo Bunny.  I have a holly punch from MS and used that on the flaps with "very merry" sentiment. I have not gotten tired of making these box cards!  Just love making them!  Peppermint and candy cane stickers are from Michael's.  Thanks for looking and Happy 2015 to everyone!!
Posted by Creative Corner Studio Blog at 8:28 AM No comments:

We wish you a Merry Christmas! 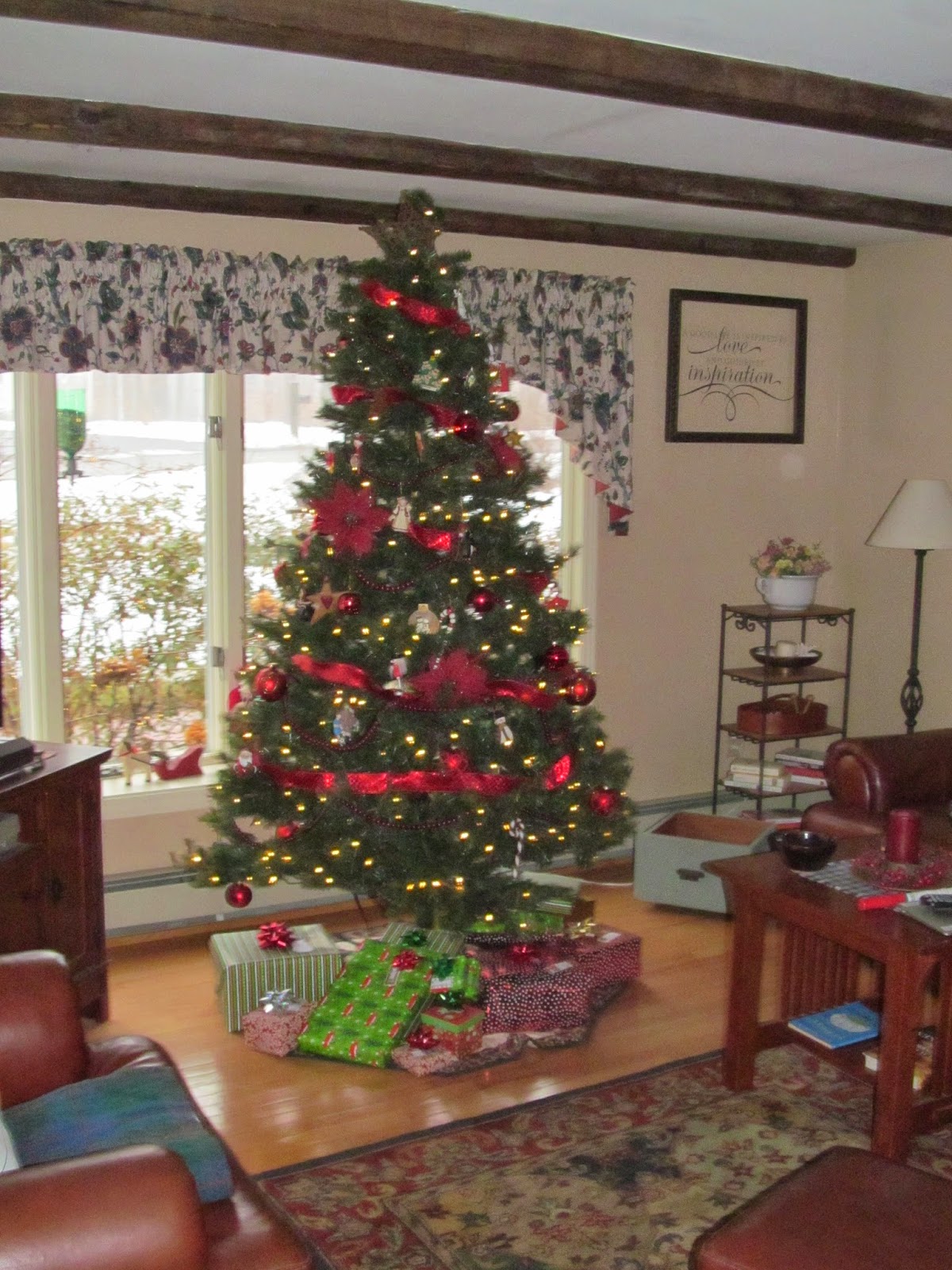 Posted by Creative Corner Studio Blog at 11:47 AM 1 comment:

Email ThisBlogThis!Share to TwitterShare to FacebookShare to Pinterest
Labels: Christmas 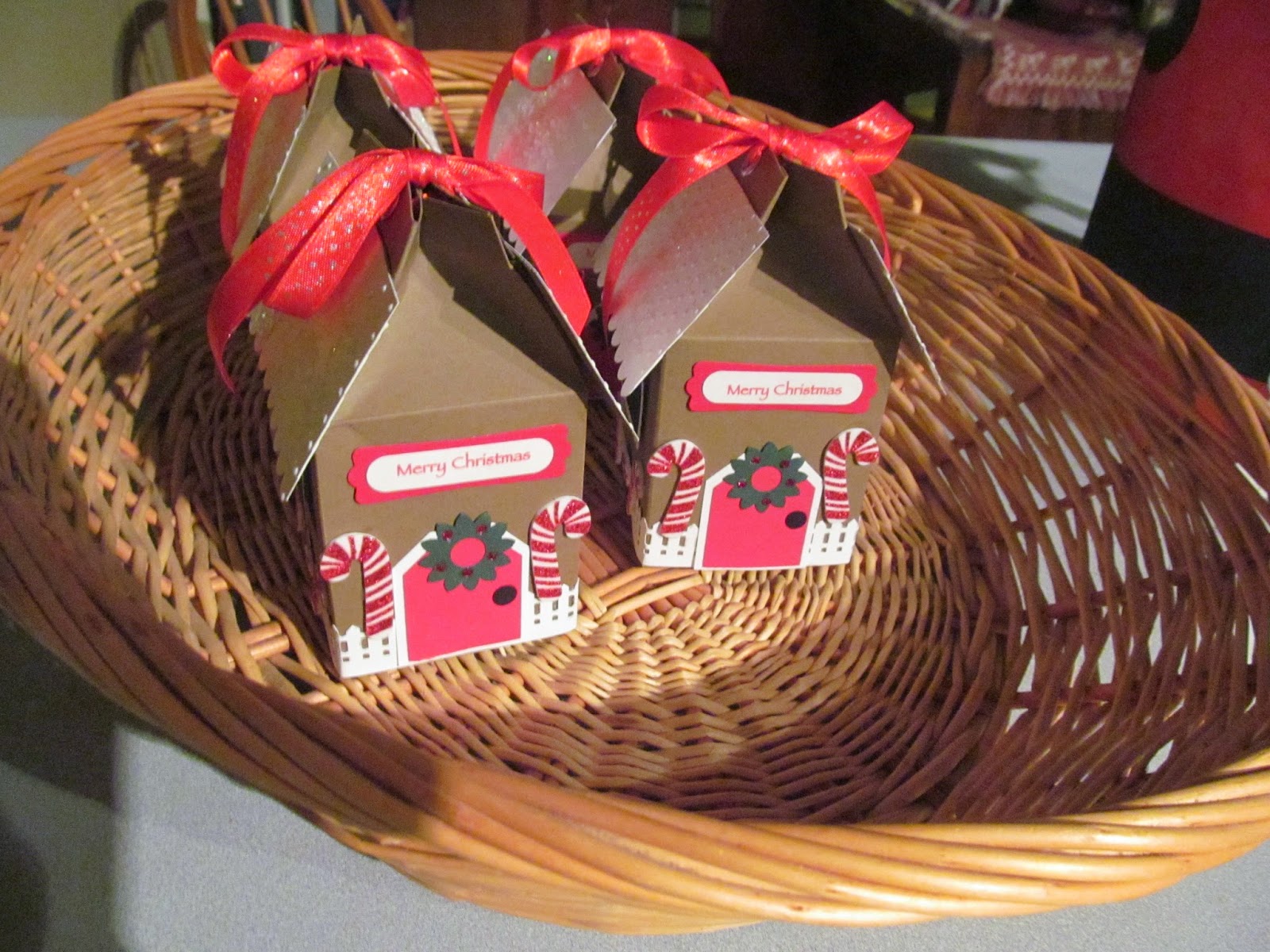 Gingerbread Houses have all been finished and filled with candy for some co-workers.  I made one earlier and posted the tutorial for the milk carton which is the base of the gingerbread house and then decorated using punches, and more punches.  I found some candy cane and peppermint candy stickers at Michael's. On the roof, I used glitter on the snow.  The side of the house are the windows with wreaths and peppermints on the fence!  So much fun to make and decorate!! 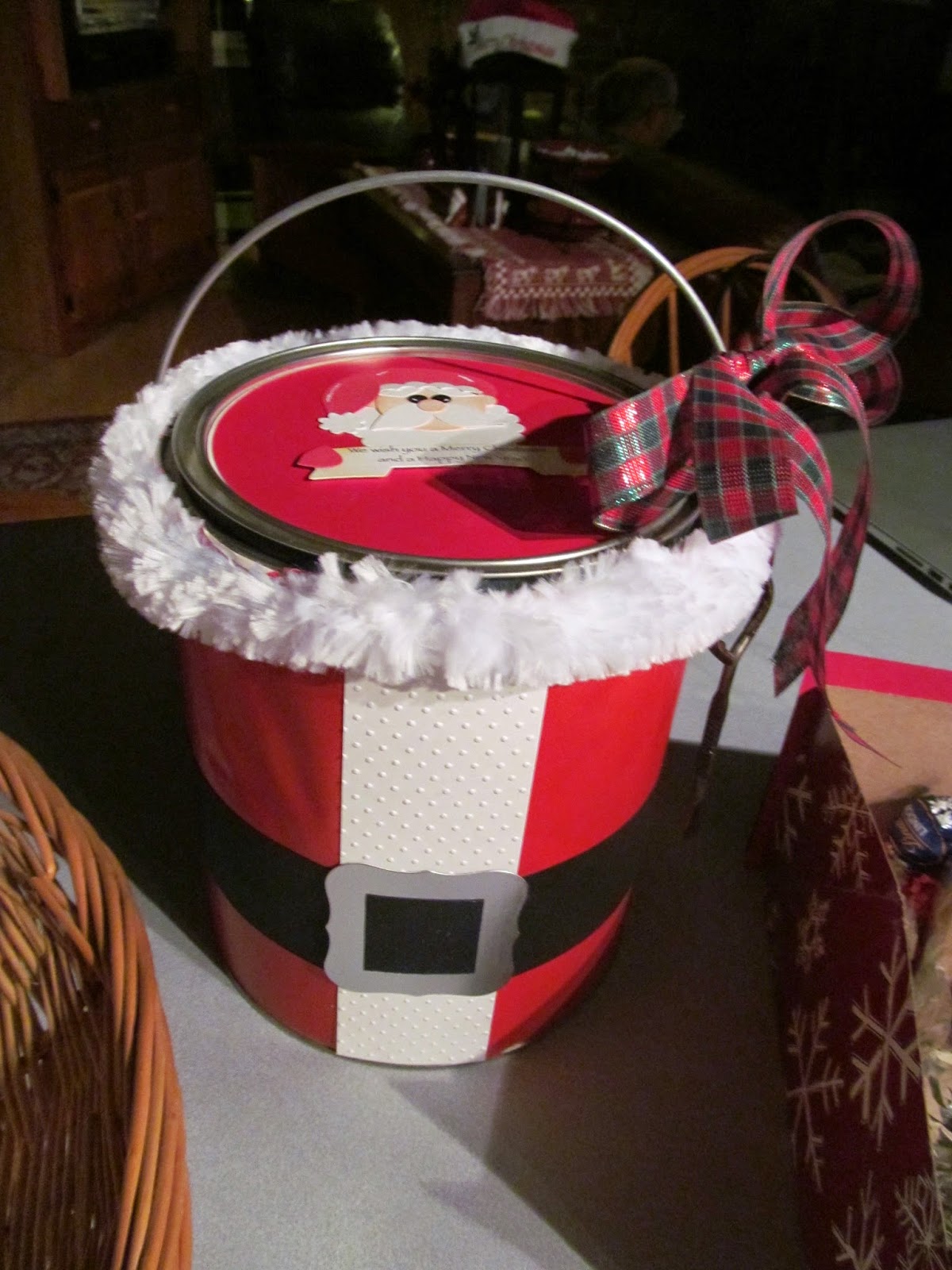 Years ago I decorated a bunch of paint cans for neighbors and friends for Christmas!  We also did them for a craft night at the office where I worked at the time.    I saw something similar to this in a picture on pinterest and thought I would try decorating one for my boss.  I filled it with homemade Christmas goodies!!  Check out the pictures below on the top of the can and a card for a friend, both are punch art!!  Santa and a singing reindeer!!  Have seen many on different ones on SC and pinterest and all are so adorable!!  Love creating them!

Posted by Creative Corner Studio Blog at 11:57 AM 2 comments: 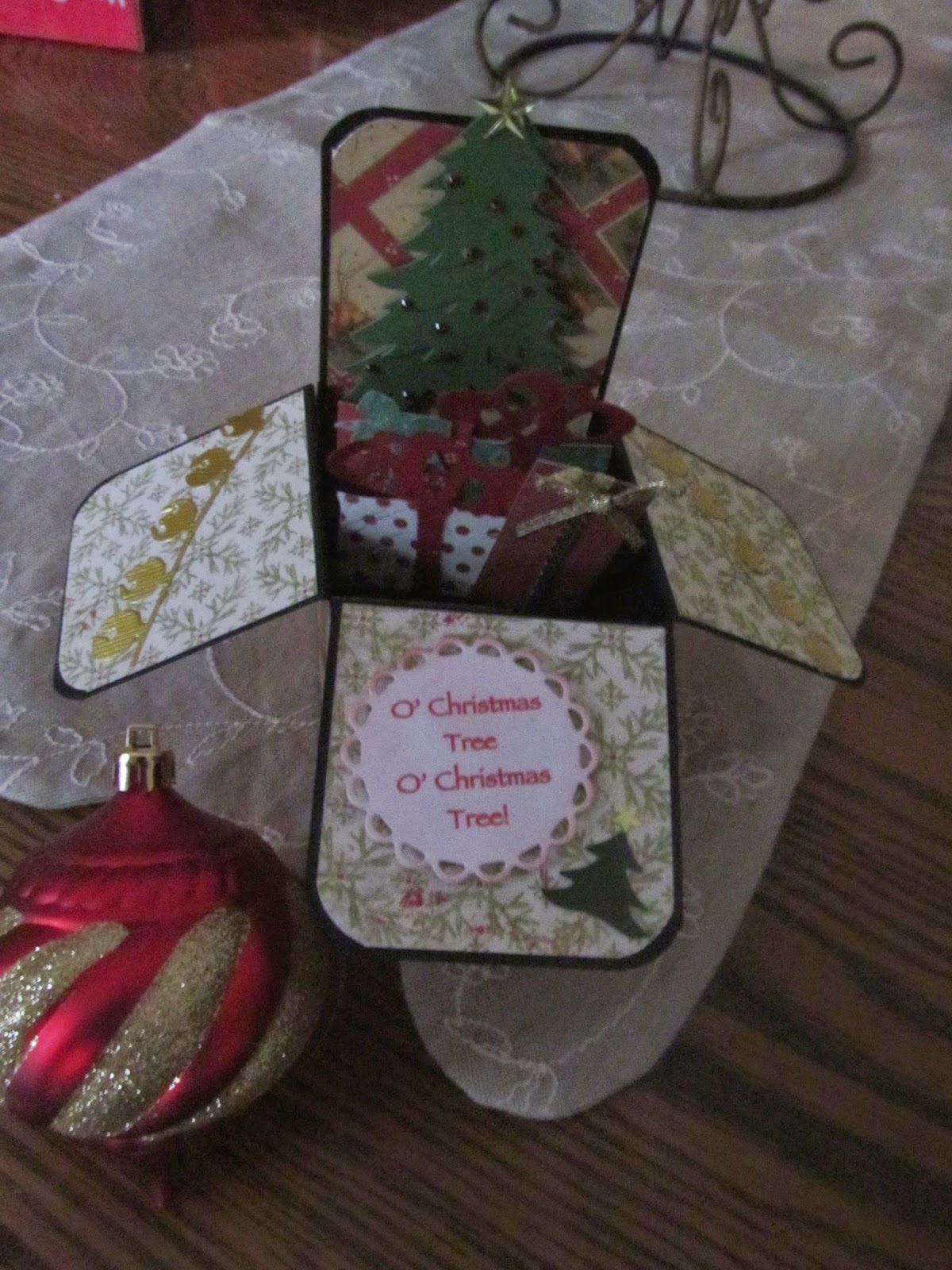 Love these card in a box cards!  I made one for my hair dresser who loves getting cards from me! His exact words were "holy moly" when he opened it!   Presents under the tree theme for this card!  I used Elizabeth Craft die for the Christmas tree with crystals to decorate. The presents are sizzix dies. On the side flaps are jingle bells in gold paper from Memory box. The paper is graphic 45 and Authenique.  Just love making these cards soooo much fun to make!!  Already thinking of another one for a neighbor who has been so helpful and kind this year!!

Posted by Creative Corner Studio Blog at 3:14 AM 1 comment: 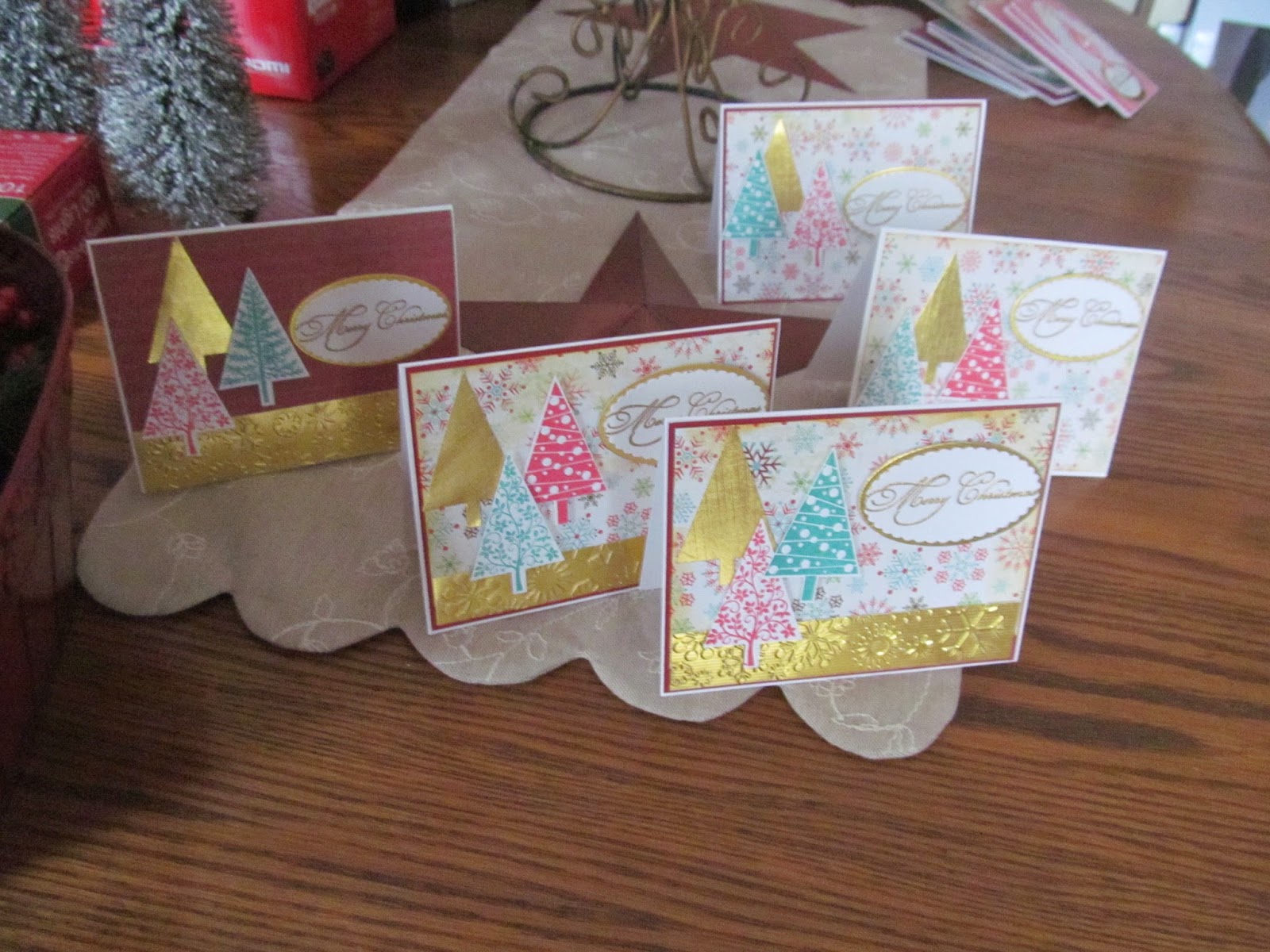 I had every intention of starting my Christmas cards this fall but the time just flies by and before I knew it, it was the "last minute".  My husband and I went to Florida last week to visit his 96 year old aunt, my sister and some friends.  It was a busy vacation but so much fun!!  The weather was pretty good.  80 degrees the first day at a craft fair and then was high 60's, low 70's which is still fine with me.  We live in Maine and it was 18 degrees here one day that we were away!  In the picture above was the first type of Christmas cards I made with the trees from SU and below is the second type that I made with the ornament dies and stamp set from SU. 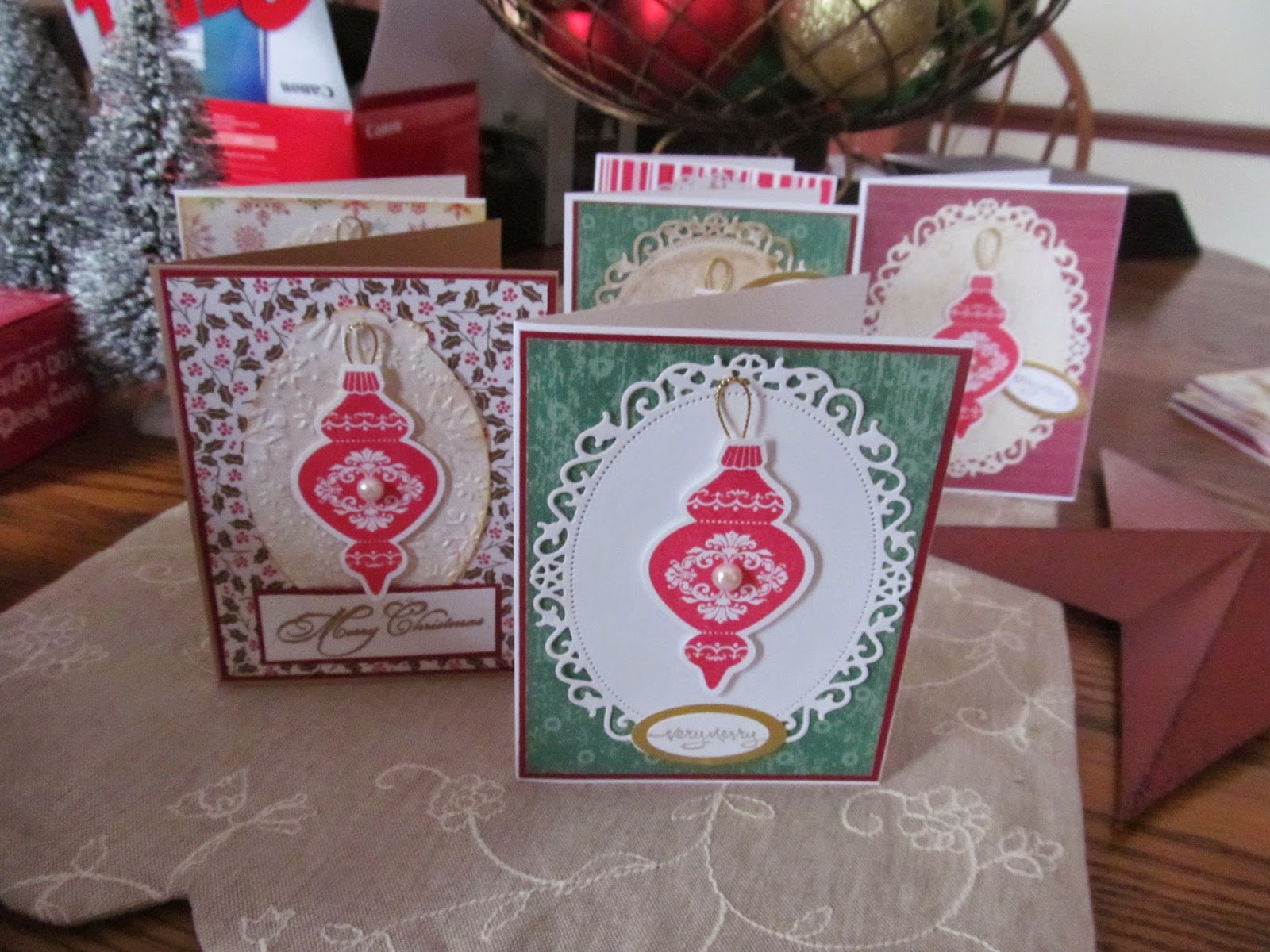 Each card I made was different.  I either used different background paper or different dies in the background of the cards.  Sometimes I embossed the background and sometimes I didn't.  Most of the items I used were from SU but I also used Spellbinders dies, and cuttlebug embossing folders.  I made 40 cards this year which is about the amount I make every year.  Love the little pearl in the middle of the ornament!! Check out the 3D ornament below!  Thanks for stopping by! 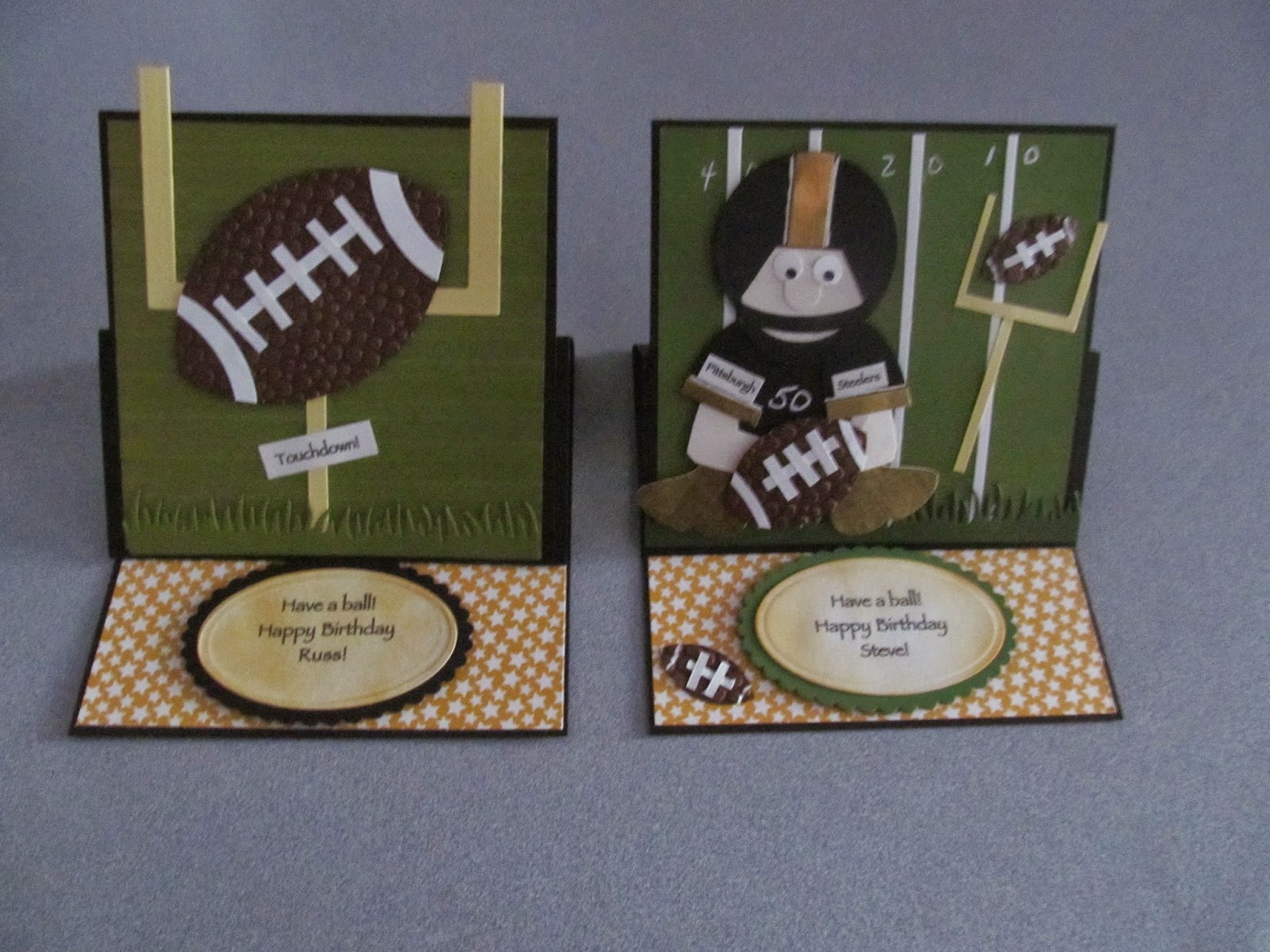 Here are two birthday cards for two guys that love football and also share the same birth date which is December 18th.  I didn't want to make the same one so I decided to make them a little different. Both of them are punch art which is so much fun to do!! To the left, Russ' card (my brother-in-law) is the football with the goal posts which was embossed with cuttlebug EF and used Die-namics grass.  I need to add something else to the card by the sentiment. I am just not sure what yet.  The inside sentiment which is not shown says, "May your birthday bring you all the things that make you smile like football!"

The other card is for my boss who is turning 50! He really likes the New England Patriots but his favorite team is the Pittsburgh Steelers.  Their colors are black and gold so I saw on pinterest a lot of different football players using punch art so I gave it a whirl.  He is a cutie with a black uniform and gold sneakers and gold on his helmet and jersey.  A lot of punches were used to include the circle, tag, oval, butterfly and heart punches.  All of them were SU punches.   I used the same die from Die-namics for the grass that I did for the first card.  The sentiment inside that is not shown says, "Congratulations and best wishes on your 50th birthday, an event worthy of celebration and reflection on five decades of life, love and laughter with plenty more yet to come.

I haven't made an easel card in a while and had forgotten how much I like making them.  For now I am finished making birthday cards and I can now starting focusing on my Christmas cards.  Can't wait to start on them now!  Thanks for stopping by!
Posted by Creative Corner Studio Blog at 5:16 PM 2 comments: